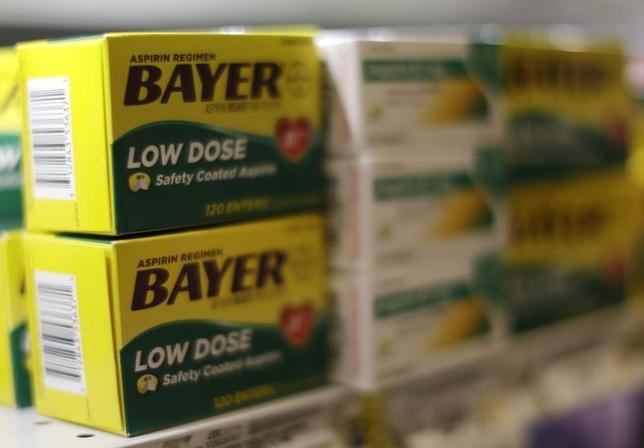 Taking one or two baby aspirins a day for at least five years was tied to a lower risk of colorectal cancer in a study from Denmark.

Earlier studies had suggested that aspirin and non-steroidal anti-inflammatory drugs (NSAIDs) such as ibuprofen may help protect against colorectal cancer, but it wasn’t clear how much had to be taken, and for how long, to achieve those benefits.

Now, using data on more than 113,000 individuals, researchers have been trying to sort out the relationship between aspirin and NSAIDs, duration of treatment, and colorectal cancer rates.

In general, the risk of developing colorectal cancer varies with age, race, ethnicity and lifestyle. More than 90 percent of cases are diagnosed in people older than 50, according to the National Cancer Institute.

An online risk calculator from the Centers for Disease Control and Prevention (available here: 1.usa.gov/1DlscTL) indicates that in the U.S., for an average white or black woman in her late fifties, the 10-year risk of developing colorectal cancer is between 1 and 1.4 percent, and her lifetime risk is between 5 and 5.4 percent. For an average black or white male of the same age, the corresponding risks would be about 1.4 percent and 5.8 percent.

On the other hand, merely having taken aspirin did not alter the colorectal cancer risk, they reported in Annals of Internal Medicine.

Nonaspirin NSAIDs were also protective against colorectal cancer with consistent long-term use, “and there was some indication that even non-continuous use of these agents may be (marginally) effective for the prevention of colorectal cancer,” Dr. Friis said.

Aspirin and NSAIDs carry their own risks, however. Long-term use can cause gastrointestinal bleeding, for example, so the potential reduction in colon cancer risk needs to be balanced against potential side effects, the authors warn.

The study had several limitations. For instance, the researchers only had data for users who obtained their aspirin or NSAIDs from doctors’ prescriptions. They didn’t include patients who made over-the-counter purchases of the medicines. Also, the researchers can’t rule out the possibility that other factors may have increased participants’ risk for colorectal cancer, such as obesity, dietary habits, alcohol use, and family history of colorectal cancer.

Dr. Friis emphasized that people should not start taking aspirin or NSAIDs on the basis of the new findings.

“Self-medication with aspirin or non-aspirin NSAIDs is strongly discouraged, due to the possibility of serious adverse events,” Dr. Friis said. “The public should not take any medication regularly without consulting with a physician.”

“Low dose aspirin, already taken regularly by millions, reduces the risk of colorectal cancer,” he told Reuters Health by email. But “before starting to take aspirin long term, it is important to discuss the implications with your family doctor or specialist.”

An aspirin a day – for years – may keep colon cancer away

A strong story that describes in clear terms the findings as well as the strengths and weaknesses of this study. It covered potential biases that could not be controlled, mentioned harms, and was overall very cautious. It would have been even stronger had it mentioned that the study was observational in nature and therefore not capable of telling us whether the aspirin, or some other factor, is responsible for the benefit that was seen. It also did not mention alternatives for colorectal cancer prevention such as proven effective screening practices. But these are relatively minor omissions in coverage that was otherwise quite exemplary.

Though evidence has long indicated that low-dose aspirin was associated with a reduced incidence of the disease, this is the first report to say how long the regimen needs to be followed.

That information is important because, this year, some 132,700 new cases of colorectal cancer will be diagnosed in the United States, and about 49,700 people will die from it, according to the National Cancer Institute. Such cancers represent 8.0 percent of all new cancer cases in the country.

No mention was made of costs, but anyone who has been to a drugstore knows that aspirin is cheap.

The story cites a 27 percent decrease among low-dose aspirin users who had taken the drug for five years or more. It also notes the incidence of the disease among different populations, and even gives readers a link to a risk calculator to determine their individual risk.

Of course, we almost always prefer stories to use absolute risk reductions over the relative risk reduction reported here (technically an odds ratio — not a “risk” reduction per se). But in a case-control study such as this one, the issue can be complicated. We’ll give the benefit of the doubt.

The story is straightforward in saying that all NSAIDs carry risks.

“Long-term use can cause gastrointestinal bleeding, for example, so the potential reduction in colon cancer risk needs to be balanced against potential side effects, the authors warn.”

It would have been easy to also mention cerebral vascular bleeds, but that’s a minor point.

The story cites “several limitations” of the study, including the fact that the researchers did not include patients who bought their aspirin or other NSAIDs without a doctor’s prescription, and that the authors were not able to adjust for some risk factors, such as obesity, diet, alcohol use and family history of colorectal cancer.

The study type (retrospective case control) could also have been mentioned along with the relative weakness of this type of study compared with a randomized controlled trial. In addition, the story in several places uses language suggesting a cause and effect relationship between aspirin and colon cancer — e.g. “taking low-dose aspirin continuously for at least five years appeared to reduce the risk of colorectal cancer” — and it quotes an independent source who says flatly that aspirin “reduces the risk of colorectal cancer.” Such a strong statement wasn’t justified by anything we saw in this study — and the paper didn’t point to any other definitive evidence that would warrant such a statement.

But despite these concerns, we think that the story overall did enough to merit a Satisfactory rating here.

The story includes comment from Dr. Gurpreet Singh-Ranger, who apparently was not involved with the study, so we’ll give it a pass. The story would have been stronger had it told the reader what made him an authority on the topic.

The story makes no reference to colonoscopy as a means of identifying and removing polyps before they become cancerous. Other screening approaches that could have been mentioned include sigmoidoscopy and fecal blood tests.

The ubiquity of low-dose aspirin is so well known that it did not need to be mentioned.

High up in the story, the reader is told what is new about this study: “Earlier studies had suggested that aspirin and non-steroidal anti-inflammatory drugs (NSAIDs) such as ibuprofen may help protect against colorectal cancer, but it wasn’t clear how much had to be taken, and for how long, to achieve those benefits.”

The fact that the story includes comments made directly to Reuters Health shows that it does not rely on a news release.

I was asked to comment on the paper due to previous research work and review articles I have published on the role of COX inhibition in cancer, specifically a review published last year in Anticancer Research. Thank you. Dr. Singh Ranger

New article by @UnhealthyAlcDrg & @garyschwitzer is 💯on point. This sums it up perfectly: "The COVID-19 pandemic has created perhaps the most challenging time for science communication in decades." #hcldr
Communicating Science in the Time of a Pandemic https://ja.ma/3ftMYpT

Important piece: "Communicating Science in the Time of a #Pandemic" https://jamanetwork.com/journals/jama/fullarticle/2768397 by @UnhealthyAlcDrg & @garyschwitzer via @JAMA_current

Science & health community: "reflect on how the words and the data matter, & then act accordingly."

All science communicators should read this very useful and smart about 1-page article "Communicating Science in the Time of a Pandemic" published in the JAMA written by Richard Saitz (@UnhealthyAlcDrg) & Gary Schwitzer (@garyschwitzer). @hsfi https://jamanetwork.com/journals/jama/fullarticle/2768397 #EBM #COVID