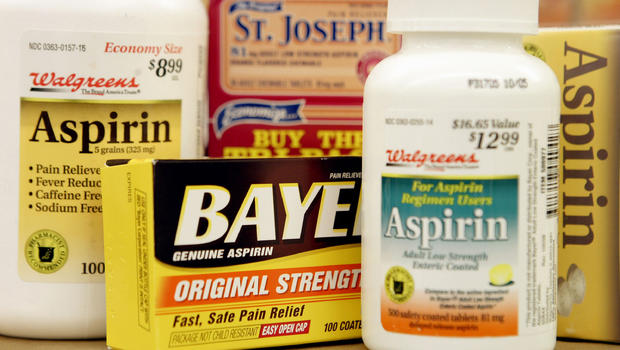 Aspirin products sit on the shelf at a Walgreens drug store in this file photo from 2004.

A government panel of experts released updated guidelines today spelling out who should be taking a daily low-dose aspirin for heart health, which also offers the added benefit of protection against colorectal cancer.

Those who would benefit from the regimen, according to the U.S. Preventive Services Task Force, must meet a strict list of criteria — including a high risk ofheart disease and a low risk of bleeding side effects.

Specifically, the group recommends that adults 50 to 59 years old who have a 10 percent or greater 10-year cardiovascular disease risk, are not at an increased risk for bleeding, and have a life expectancy of at least 10 years take a daily low-dose aspirin to prevent heart attack, stroke, and colorectal cancer.

“As with any drug, patients and their doctors must balance the benefits and risks of taking aspirin,” Dr. Kirsten Bibbins-Domingo, chair of the task force and professor of medicine, epidemiology and biostatistics at the University of California, San Francisco, told CBS News. “The benefits of aspirin outweigh the harms for most people in their 50’s who are at risk of cardiovascular disease but not at increased risk of bleeding. For people in this group, taking low-dose aspirin daily can help reduce the risk of heart attack, stroke, and colorectal cancer.”

Adults in their 60s can also benefit from regular use of low-dose aspirin, but the bleeding risk is higher in this age group, so doctors should help these patients decide whether or not aspirin therapy is right for them on a case-by-case basis.

“The task force recommends that all patients talk to their doctor to evaluate their risk for cardiovascular disease and bleeding before making a decision about aspirin use, but this is particularly important for people in their 60s,” Bibbins-Domingo said.

Heart disease and colorectal cancer are among the most common causes of death in the U.S. According to the Centers for Disease Control and Prevention, about 610,000 Americans die of heart disease each year, accounting for 1 in 4 deaths. Colorectal cancer is the third most common cancer diagnosed in both men and women (excluding skin cancers) and a leading cause of cancer death, the American Cancer Society reports.

While taking low-dose aspirin daily can help prevent heart troubles, doctors note that it also increases the risk of bleeding in the stomach and intestines, and strokes caused by bleeding in the brain. The task force looked at the most up-to-date research on both the benefits and harms of taking aspirin for the primary prevention of both heart disease and colorectal cancer to arrive at their recommendations.

When it comes to dosing, experts say sticking to a low-dose baby aspirin is best.

“The evidence shows that there’s really no incremental benefit of going over 81 milligrams, and in fact, you may increase bleeding risk by going over,” CBS News medical contributor Dr. Tara Narula, a cardiologist at Lenox Hill Hospital in New York City, told “CBS This Morning” when the draft guidelines were released last September.

At this time, the task force reports that more research is needed to assess whether taking aspirin is beneficial for people who are younger than 50 or those who are 70 and older.

Should you be taking daily low-dose aspirin for heart health?

This is a short report on the recent U.S. Preventive Services Task Force (USPSTF) recommendation statement on the use of aspirin, one of two stories we reviewed on this topic. (Here’s the other, from STAT News.)

The story includes sufficient details on USPSTF’s recommendations on who could or could not benefit from taking a daily baby aspirin. However, very little is discussed beyond what was sent to journalists in advance, as a news release.

Aspirin is widely prescribed or purchased over-the-counter for aches and pains, and increasingly used to prevent cardiovascular events, such as heart attack and stroke, over the long term. Better public understanding of the benefits and harms of aspirin, and clearer delineations of the science around who is likely to benefit from taking it, are all likely to have an important health impact.

It is universally known that aspirin is cheap, sold widely and in a manner where its cost will not be a barrier to consumption, so the cost information is not necessary to reiterate in this report.

While we are told of the benefits to cardiovascular prevention, those effects are never quantified. This strikes as a missed opportunity to “show the numbers,” which are easily obtainable from the USPSTF recommendations and tables that discuss the quantified benefits.

Harms are explained, and that’s sufficient to rate as Satisfactory.

Unlike the other story we reviewed, this story didn’t indicate there are some important limitations to the evidence being presented by the task force. This gap in information in the story perhaps could have been avoided had more sources been interviewed, as this issue is being widely discussed among news outlets for physicians.

No obvious disease mongering here, as heart disease and colon cancer are substantial burdens on the U.S. population.

This was a close call, and just barely squeaked by as Satisfactory. The story included quotes from two interviewees, the chair of the task force and from another physician. However, that quote is lifted from a CBS TV interview from last year, and not regarding this latest report.

There are other ways to reduce cardiovascular risk, (exercise, diet modification, quitting smoking, other medications) and those would deserve at least a mention in a story like this, and how they compare in terms of benefits and harms.

It’s pretty clear that aspirin is ubiquitous and sold almost everywhere as an over-the-counter drug, so we’ll rate this one N/A. This story, and the other we reviewed, might have benefited from mentioning that the drug has a generic name (known as ASA or acetylsalicylic acid). Generic versions of the drug do exist, are likely cheaper than the brand name, and equally effective.

There were no statements exaggerating or suggesting the novelty of the drug, or its use, for these purposes. The new thing here is the task force’s recommendation, and that’s made clear.

While there were some passages in the story that read very similar to the news release, because this included an original interview, it rates as Satisfactory, though just barely.