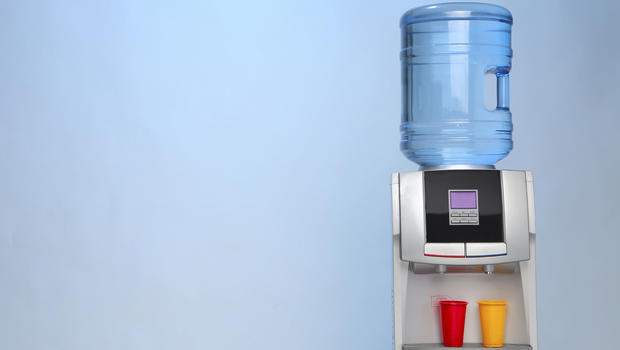 The study, published in JAMA Pediatrics, analyzed data collected from 1,227 elementary and middle schools across New York City – some with and some without “water jets.” The large, clear, electrically cooled jugs with a push lever for fast dispensing were placed in 483 school cafeterias, about 40 percent of schools during the 2008-2009 and the 2012-2013 school years.

Schools with water dispensers saw a modest weight drop among students, according to the study by researchers from NYU Langone Medical Center, New York University’s Institute for Education and Social Policy, and the Center for Policy Research at Syracuse University’s Maxwell School of Citizenship and Public Affairs.

Water jets also were linked with a decrease in the amount of half-pints of milk students bought, which could be a potential mechanism of weight reduction, the researchers found.

Modern water dispensers may be more effective than old-fashioned water fountains since water quality and cleanliness may deter kids from using older fountains, and they’re not as efficient at serving large numbers of children, experts noted in an accompanying editorial.

“Sometimes, a very simple intervention can have a powerful effect,” wrote Lindsey Turner, of Boise State University, in Idaho, and Erin Hager, from the University of Maryland School of Medicine, in Baltimore.

“The study by Schwartz and colleagues in this issue of JAMA Pediatrics adds to a growing body of evidence supporting the importance of providing drinking wateraccess in schools. In this study, the findings demonstrate that water access in schools can promote healthy weight outcomes among students,” Turner and Hager said.

Despite it being a fairly short report, CBS covers a lot of ground: it quantifies the benefits in absolute terms, outlines the study design and weighs the advantages of modern water dispensers against “old-fashioned” water fountains. But in other areas, the story falls short. There is no mention of costs and of study limitations. Although it quotes from the accompanying JAMA Pediatrics editorial, the CBS story doesn’t feature any critical perspectives on the study. We would have liked a closer look at some of the study’s shortcomings, which could have been achieved by comments from an independent source, or someone who was not involved in the study. More context on where this study fits in “the growing body of evidence” would have also been welcome.

Finally, word choice could have been better. CBS refers to the JAMA editorial and writes that “the study’s findings are significant.” However, “statistically significant” has a different meaning than what the public believes is “significant.” The distinction should be clear, or another word should be used.

Childhood obesity is a health concern that is on the minds of many parents and policymakers. The Centers for Disease Control and Prevention (CDC) estimates childhood obesity has more than doubled in children and quadrupled in adolescents in the past 30 years. In 2012, more than one third of children and adolescents were overweight or obese, the CDC said. And compared to other countries around the world, the US comes out on top when it comes to obesity among adults, according to a 2014 OECD report.

There are even speculations that high obesity rates may cause life expectancy in the US to decline. Therefore, any efforts to curb the “obesity epidemic” in America is newsworthy, especially if the intervention is low cost, low risk and for children.

The CBS article does not mention any costs associated with the installation of a water dispenser. The JAMA Pediatrics article states that water jets are “relatively low-cost” interventions, with a one-time cost of about $1,000 per machine. There are also ongoing maintenance expenses, as well as additional costs for disposable cups. In addition, if the jets affect sales of milk and other beverages on school grounds, the costs would actually be higher still.

We believe the water jet cost should have been covered in the story, since researchers in the original journal article emphasized the association between a “relatively low-cost water availability intervention and decreased student weight.” That’s why we give the CBS article an Not Satisfactory rating here.

The CBS story does a good job quantifying the benefits in absolute terms, when the lead researcher points out that water dispensers were associated with “a one percentage point reduction in the likelihood of being overweight for boys and a little over half a percentage point reduction for girls.” The article translated this for readers as “a modest weight drop among students.”

The piece also notes that water jets were linked with “a decrease” in the amount of half-pints of milk students bought, but it does not give any specific numbers. Specifically, researchers found a 12.3 decrease in the number of all types of milk purchased per student per year.

We think the quantification of benefits in absolute terms is enough to merit a Satisfactory rating here.

Students in New York City schools had access to water through drinking fountains before this intervention study. This study looked at a new way to deliver New York city tap water to kids, which may have encouraged them to opt for water instead of sugary beverages, like soda.

We rate this one Not Applicable.

The CBS story doesn’t mention any study limitations or take any sort of critical angle on the research.

But in the original journal article, researchers point out some of the shortcomings of their data. For one, they only looked at administrative data on water jet delivery and did not directly observe water consumption in the cafeteria. They also used the same technique for milk purchases, and they acknowledged that they had no data on which beverages students usually consume in school.

Since the CBS story doesn’t point out any limitations to the evidence, we give it an Not Satisfactory rating here.

There is no disease mongering in the story.

No conflicts of interests were reported in the original journal article. The study was funded by the Eunice Kennedy Shriver National Institute of Child Health and Human Development.

The CBS report only quoted comments from the study’s lead researcher and then excerpts from the accompanying JAMA Pediatrics editorial. Technically, these editorial comments are sufficient to clear our bar, but we’d note that the thrust of the quote is mainly to confirm what the researchers are reporting. We would have liked to have seen a quote from someone willing to provide a more critical perspective on the study, such as the significance of its limitations and their impact on the research.

While we give the benefit of the doubt here as we always do, the story didn’t really fulfill the spirit of this criterion.

The story explains how water jets may be more effective than old-fashioned water fountains, due to concerns over water quality and fountain cleanliness. Drinking fountains also are less efficient at serving large numbers of children, the article adds.

The availability of water dispensers is not in question, which is why we rate this Not Applicable.

We would have liked to have seen a bit more context in the CBS story. Research looking at water availability is nothing new and has been conducted in the US and abroad – for example in Germany, researchers said. One US study found that water consumption nearly tripled after the installation of water jets, while the German study saw a decreased risk for students being overweight if more water was available in the classroom.

However, the CBS article does quote the JAMA editorial, which pointed out this study “adds to the growing body of evidence supporting the importance of providing drinking water access in schools.”

We think that’s good enough for a Satisfactory rating.

The article does not rely on any news releases we found online. There is also evidence of original reporting in the lead researcher’s second comment, as he “told CBS News.”