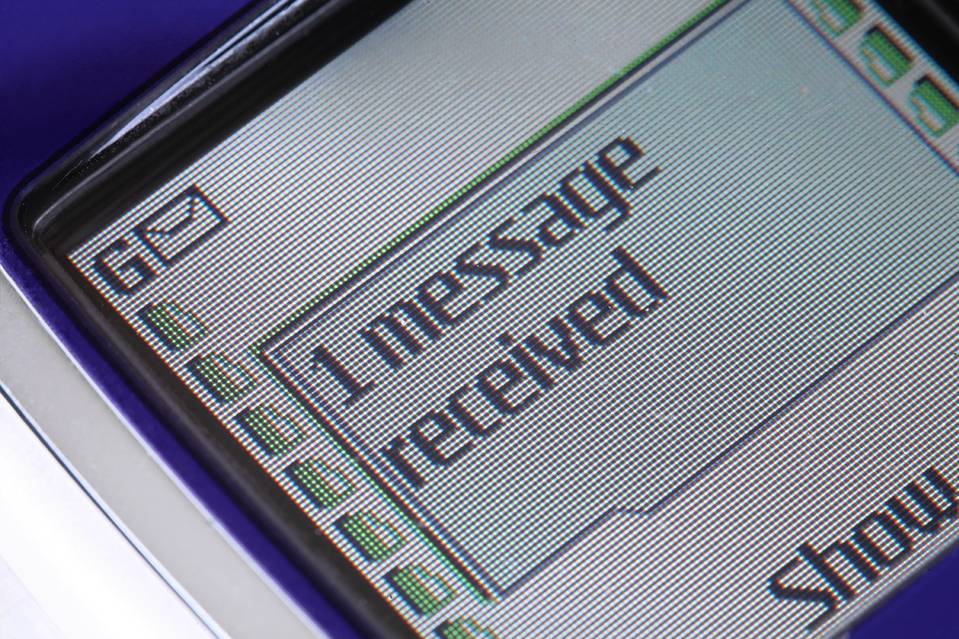 Text messages give health-care providers a way to connect with patients recovering from heart attacks after they return home. PHOTO: ISTOCKPHOTO/GETTY IMAGES

A six-month clinical trialin Australia found that patients recovering from a heart attack were more likely to maintain lower blood pressure, less body fat and lower cholesterol levels than a control group when the patients received text messages asking and giving suggestions about their health routines. Patients receiving the texts also were more likely to be active and to quit smoking than the patients in the control group, who didn’t receive such texts.

Repeat heart attacks make up more than a quarter of all heart attacks in the U.S., according to the Centers for Disease Control and Prevention. Many of these attacks could be prevented by lifestyle changes. But while health systems have gotten very good at treating heart attacks, they struggle to connect with patients recovering from heart attacks after they return home.

In the immediate aftermath of a heart attack, “doctors dump a lot of information onto patients in a few days,” says Clara Chow, an associate professor at the University of Sydney Medical School, and leader of the study. But afterward, there is often little follow-up to make sure the patients follow through on recommended practices. “Texts allow us to give support in bite-size chunks,” Dr. Chow says. 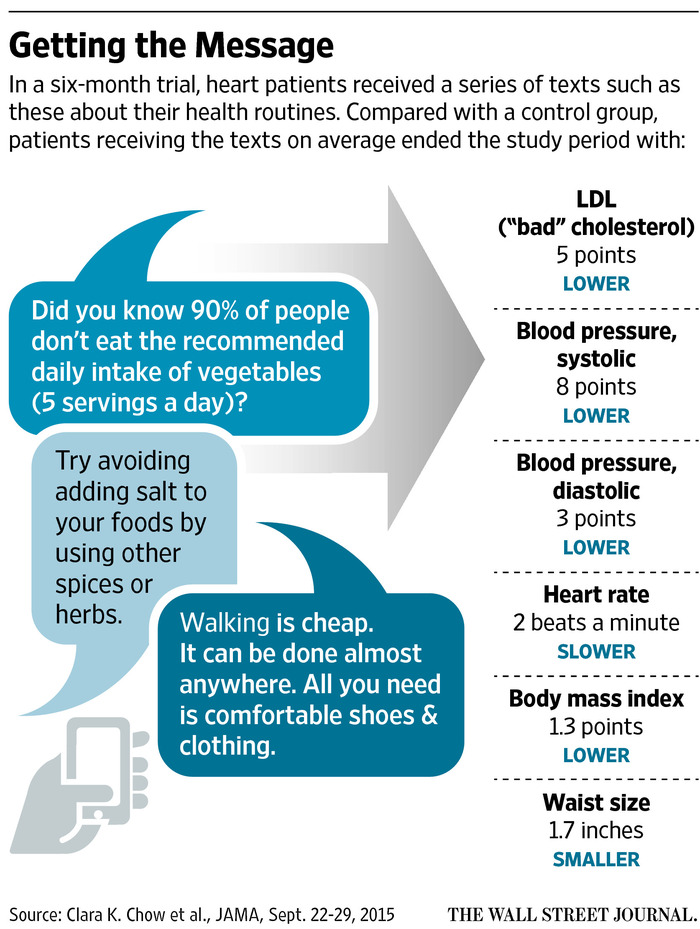 The six-month study in Australia included about 700 patients with coronary heart disease. Half of the patients received four text messages a week generated by a computer algorithm designed to be encouraging and give helpful advice, such as: “Have you gone for your walk today, Jane?” Or “did you know 90% of people don’t eat the recommended daily intake of vegetables (5 servings a day)?” The other half of the patients received no such texts.
After six months, the difference in blood pressure between the two groups was similar to what would have been achieved using a standard blood-pressure-lowering tablet, says Dr. Chow. She says that the differences in body fat and physical activity were also large—“comparable or greater than [would have been expected if the patients had been] attending a cardiac-rehabilitation program.” The effect on cholesterol level was smaller, less than 20% of what could have been expected if comparing a statin with a placebo, she says.

While many previous studies have looked at the effect of text messaging on certain behaviors, this study stands out, doctors say, because it used objective measures, such as blood pressure and cholesterol levels, rather than relying entirely on self-reported metrics, which could be biased.

Earlier studies also were often conducted on a smaller scale and over a shorter time—three months or less, says Shivan Mehta, associate chief innovation officer at Penn Medicine in Philadelphia. The length of the Australian study was important, Dr. Mehta says, because the first six months after a heart attack are a high-risk period during which new health habits are formed. Another advance, he says, is that the Australian study targeted multiple risk factors concurrently—smoking, exercise, diet and general cardiovascular awareness, rather than focusing on a single behavior.

Dr. Chow is now attempting to replicate her results with a new study over a longer period and using a larger sample size. The new study will be run from more than 15 locations for 12 months and involve 1,400 patients. And unlike the earlier study, in which patients didn’t have the opportunity to text back, this study will encourage participants to send questions to a health counselor. There will also be more focus on encouraging patients to continue taking prescribed medication.

Experts hope that targeted text messages can also help patients with other severe and chronic diseases, such as diabetes, chronic lung disease and even mental-health illnesses, when patients require continuing support and lifestyle modifications. Texting also may be helpful in countries where patients don’t have easy access to medical support.

Ms. Ward is a writer in Mendham, N.J. Email her at reports@wsj.com.

How to Prevent a Heart Attack: Text Patients on Healthy Habits

This is a story about a now year-old study looking at whether a program of semi-personalized mobile phone text messages supporting healthy lifestyle choices led to significant differences in cholesterol levels, systolic blood pressure, and BMI in a group of patients with known coronary heart disease, compared to those who did not receive such messages.

The story makes those differences clear in an accessible chart. What is less clear is whether these differences are due to beneficial changes caused by the text messages or other factors. For example, in a subsequent letter to the journal, a researcher notes that the differences in blood pressure between the two groups were due mainly to 7-point increase in the control group, whereas the text message group’s blood pressure stayed about the same over the course of the study. Similarly, the BMI differences between the groups were due partly to an increase in BMI in the control group and weren’t entirely due to reductions in the text message group. The story communicates the study results accurately and doesn’t suggest that the text messages lowered CVD risk factors from baseline. Without a more specific explanation, however, many readers may assume that’s what happened.

Another cautionary note is that the headline goes beyond the findings, suggesting that text messages can possibly “prevent” heart attacks. The study offers no evidence for that link: There was no measurement of heart attack rates between groups. Instead, they measured several surrogate markers associated with heart disease, such as lipid levels and blood pressure.

According to the story, more than 25% of all heart attacks in the United States are “repeat” events, making treatment—both medication and lifestyle elements—of heart attack victims once they have returned home important. Social media and text messaging offer means for providing informational interventions, and studies of the impact of messages on a host of illnesses is brisk.

So far, past studies indicate that people abandon healthy behaviors far more quickly than would be perhaps predicted, so a new study showing the potential that text messaging can be an effective behavior-changing intervention is welcome news.

Although the peer-reviewed study on which this story seems to have been based on makes the point that text messages could offer a low-cost strategy for reducing the chances of subsequent heart attacks, the story does not reflect on cost.

A clear and readable chart in the story quantifies the apparent benefits of these text messages. But what’s missing here is some nuance: The control group saw a rise in blood pressure, whereas the experimental group remained relatively the same–their blood pressure didn’t actually get lower. So, does that even translate to an actual reduced heart disease risk? And does any of this actually prevent heart attacks? These unanswered questions could have been better emphasized.

The concept of “harm” does not appear to be relevant here. Individuals may find text messages to be annoying, of course, but the study itself notes that participants “overwhelmingly” reacted positively to the intervention. That doesn’t make it into the story.

The story makes it clear that the study utilized an experimental and a control group, and that this study duration was longer than past studies. Yet the headline suggests that text messages can “prevent” heart attacks. The study offers no evidence for that link: There was no measurement of heart attack rates between groups. Instead, they measured several surrogate markers associated with heart disease, such as lipid levels and blood pressure. This should have been stressed.

The story clearly identifies one source as the leader of the study and includes a second source who appears to be independent of the research.  Funding sources are missing from the story, but the study’s declarations of funding do not seem eyebrow-raising.

The story does mention some other interventions used to prevent heart attacks, such as typical medications taken to lower blood pressure or cholesterol.

The story explains that the study leader is now involved in an effort to replicate her results, which implies that the treatment regimen is not available at present. However, studies of social media and apps used to promote healthy behaviors are ubiquitous, so it might have been useful for the reporter to explore the availability of this strategy compared to others on the market now.

The text does a decent job of explaining the novel aspects of the study compared to some similar efforts, though more could have been included on the results of the previous research.

Also, since this particular study was actually published nearly a year ago, in September 2015, an effort to update our understanding of message effects would seem to make sense.

We weren’t able to locate a news release, but the inclusion of an independent source in the story is a reliable indicator that the story didn’t rely on one.

Words of real wisdom, as usual @garyschwitzer
And: “There were no details, charts, graphs, numbers, nothing published in a journal."
#Pharma chairman:“If you don’t put out data people will say why are you withholding the data?”
Well, yes, that is exactly what people are asking. https://twitter.com/garyschwitzer/status/1264572399523180548

How Upbeat Vaccine News Fueled a Stock Surge, and an Uproar. #COVID19
https://www.nytimes.com/2020/05/23/health/coronavirus-vaccine-moderna.html